Although he came up with the term ‘cyberspace’ in the early 1980’s, William Gibson entered a version of it for the first time on October 9, 1999, in a darkened room in Cheltenham Town Hall during the town’s literary festival. I know, because I was his guide and he told me so.

We had just come off the main stage after a discussion about his recently published novel ‘All Tomorrow’s Parties’, and I’d invited him to the festival’s online zone to hang out with me in LinguaMOO, a text-only teaching system where I had a virtual office.

After he’d signed some books we went into the computer room and he logged in as Bill_Gibson, chatting for a few minutes with members of the the LinguaMOO community, including the TrAce writing community that I was part of. He started off well:

Bill_Gibson says, “Hello, this really is Wm. Gibson, tho you won’t believe me…”

(you can read more about this in this report) 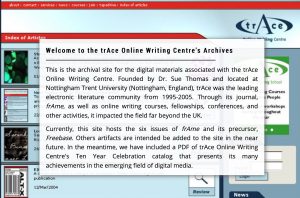 I’d been using LinguaMOO for a while, having been invited by Sue Thomas when I was teaching for the trAce Online Writing Centre at Nottingham Trent University (the archive is still online), and I’d carried on using it while teaching my online journalism classes at City University, London, as it was a great way to give the students a sense of what the online world felt like. I’d teach one class a year there, and had a written myself an office to use for the purpose.

In the session at Cheltenham Bill Gibson gave me a wonderful gift: he wrote me a suitcase. That is, he created an object in the MOO, described it and set its properties, and then handed it to me.

It was a battered brown suitcase, with bullet holes in it telling of a journey through more dangerous places. It had been written so that you could open it and put any other LinguaMOO object in it, so it served a useful function, and once I received it put it carefully on the floor in my office so I wouldn’t misplace it.

I used LinguaMOO intermittently. and every time I went back to my office I’d ‘examine’ the suitcase. It wasn’t like anything else I’d ever owned, existing only in the space where Bill Gibson’s imagination met the code of the MOO, brought into existence by our shared willingness to believe in it and to engage in this consensual hallucination in text space. I cherished but as far as I can find in my records I never made a copy of its description – it existed only in where I’d placed it, online.

Sometime in 2003, after I’d stopped teaching regularly, I tried to login but the connection was refused, and it turned out that the server had been decommissioned. My suitcase is now a few bytes on a data tape or ZIP disk (ask your elders) that will never be revived, like a construct in a vault. But it remains in my memory, distinct and treasured, a moment in time captured in bits and the finest gift Bill Gibson could have given me in addition to his novels.

And of course I still have it in my head, as the idea of the suitcase, in the idea of my office, hosted by the memory of LinguaMOO. The boundary between the virtual world and the world of the imagination has always been porous.

One of the nice things about being on the other side of the screen, in the virtual world, is that you can write an abstract concept just as easily as you can describe a physical object, and that’s also true in memory.

So this week I am putting something precious into the memory of my virtual relic, something I want to keep safe for when it’s next needed.

Here in the real world I can look at the words ‘European Union’ on my passport to remind myself of what has been taken from me against my will, but when it comes to my suitcase I’m going to go one step further. I’m placing my European citizenship carefully in my battered, bullet-holed, Gibsonian suitcase, just so I know exactly where it is when I need it again.