Towards the end of Ivan Reitman’s Ghostbusters there’s a confrontation on top of Spook Central, and after the ghostbusters have all been blasted away by Gozer/Janine, Winston turns to Ray and says in an exasperated tone: ‘Ray…when someone asks you if you are a god, you say yes!’

Ray…when someone asks you if you are a god, you say yes!

It’s the same with your subconscious. When you ask yourself if you’ve had enough, it’s a good idea to say ‘yes’ and do something about it. A clear message from the bits of your mind that don’t get to hold the attention baton very often should be attended to, because they have to work hard to get through to the systems that get most of the limelight, and so it is probably important.

And so it was for me this week.

I’ve just spent three days trying so hard to sabotage my work pattern that I would be a fool to disregard it, and yet it was only in the middle of a WhatsApp chat with Ira Bolychevsky that I realised what I’d done. I thought I was being careless, but in fact I was sending myself a very clear message.

And the message is: you can’t carry on juggling like this.

It started gently. I packed on Wednesday night for an early departure from Cambridge to Copenhagen where I was to give the opening talk at a conference about the importance of cultural heritage in the modern world – specifically the sorts of audio visual archive I work with at the BBC.

I’d been looking forward to it, because Copenhagen is a lovely city, my friend Louise Broch (who I know through the Audio Visual Think Tank) was a welcoming host, and it was a chance to get away from the many delights of UK politics (and to drop into the even more interesting delights of the Danish general and European elections, but at least as an outsider…).

As I picked up my rucksack and left I noticed the yellow bag with the Kirkcaldy print on it, a gift from @gearsforqueers (see their Etsy store here..) but didn’t remember that it contained my USB-C Macbook charger and cable, my continental adaptor, my iPhone charging cable, my USB-C to USB and HDMI dongle, and my hairbrush (a vital accessory – you’ve seen my hair). Basically, everything I needed to keep my electronics functional and my appearance tolerable.

I realised what I’d done when I got to Luton Airport and decided to do some preparation for the talk I was scheduled to give the next day and which was rather underwritten. I’d failed to plug my laptop in to charge overnight (yes…) and the battery was 45%. However once I realised that I’d simply forgotten the charger and recalled the yellow Kirkcaldy bag sitting on the chair by my desk, I relaxed – I had an hour to my flight, and this was a problem money could solve

I headed to Dixons and bought a new USB-C charger, a cable for the laptop, and a cable for the phone. Already spending more than I wanted to I opted for the slightly cheaper UK-only charger not the traveller model with swappable plugs.

The observant among you will notice that I didn’t replace the dongle or the adaptor. We will come to that.

I got to the gate in good time, found a power outlet – after this many years I’ve learned to identify them by the traces of geek sweat that linger in the air around them – and opened my new acquisitions. At this point I discovered I’d bought a USB-C adaptor but a USB-USB-C cable so I couldn’t charge anything. Fortunately both phones and my iPad had a decent charge so I put the phones in low power mode and blessed the fact that I was flying to a Schengen country so I’d be able to use the shops in the terminal before passing baggage control.

On the flight I read Natalie Haynes’ astonishing new novel retelling the stories of the Trojan War from the perspective of the women involved, A Thousand Ships, and felt much better. The talk would wait.

I arrived at Copenhagen Airport and spotted an electronics shop which sold me the right USB-C cable.

The observant among you will notice that I didn’t replace the dongle or the adaptor. We will come to that.

From the airport I went to visit Louise Broch at the DR offices in DR Byen and had an excellent time looking a their archive and discussing the conference plans. I didn’t mention my cable issues or ask to plug anything in as I was confident it would all be fine once I got to my hotel.

Arriving at my hotel I unpacked and spread my belongings on the bed before assembling the elements I needed to power up my many devices. It was at this point that I realised that I had no adaptor. I told you we’d come to that.

It nearly broke me. Although I was in a modern hotel there were no USB sockets, so I couldn’t just plug into the wall. I briefly considered just winging my talk and letting phones, computer and iPad run out of charge but of course my boarding pass for the return flight was on my main phone so that wasn’t really an option.

So I headed downstairs to the business centre in the hope of finding USB sockets and perhaps even a UK plug socket. I found a bank of old PCs and one had a visible USB socket so I charged my phone for 30 mins while writing some notes for the talk with my laptop screen brightness turned down. Knowing I could charge the phone meant I could at least get home.

I considered heading back to the railway station or even the airport to buy an adaptor, but first I asked at the desk and they had a supply – I think they were in a box labelled ‘easy money from forgetful brits’ – and sold me one.

So I went back to my room, hopeful that I could charge and use everything I needed. At this point I realised I’d forgotten my dongle so couldn’t charge the phones or iPad. I told you we’d come back to that.

However, buried in my pencil case was a simple USB-USB-C adaptor (without a power input), so by charging my laptop to 100% and then plugging in the phone or iPad I could get through without acquiring yet another piece of redundant tech.

And so it went. The conference was excellent, my talk was well recieved, and I met a really fascinating group of people. I blamed the whole fiasco on my tiredness – it had been an early start, I’d had a busy week, there had been a lot on.

And on Saturday I packed up and headed back to Cambridge without incident. Walk to the rail station, train to the airport, flight on time – and while in the air I finished A Thousand Ships, which only got better at the end and moved me enormously. I’ll never read a Greek myth in the same way again. You really should read it.

At Luton I waited for the coach, which was on time, and on the way back to Cambridge decided to charge my laptop so I could do some writing after I arrived since I thought I’d be waiting for Katie to collect me.

I slept on the coach. I was tired. It had been an early start, I’d had a busy week, there had been a lot on. So as we arrived in Cambridge I was a bit rushed to pack everything and it was only when I sat down in the Tram Depot to do some work while waiting for Katie that I realised I’d left my laptop in the pocket on the back of the seat in front of me.

I rushed back to the coach stop but the 787 from Luton Airport had already gone. As had my MacBook Air.

In order to reduce any anxiety for those reading, I got it back unscathed a mere seven hours later thanks to National Express and Whippet – who run the coaches on that route – and the good offices of two drivers. My laptop was retrieved from its seat back by the driver and kept safely, and I collected it from him at Parkside Coach stop at 0130 on Sunday morning as he stopped en route to Norwich. I’m inordinately grateful to all who helped.

But what surprised me was that I didn’t panic, I didn’t go into a meltdown. I worried about the potential for my accounts to be compromised but I have a good password and disk encryption in place, and I have Find my Mac so I could set the device to erase once it connected to the network. I’d have to change a lot of passwords, and worry about the leakage of photos and any documents, but it didn’t feel like an imminent catastrophe.

In fact, I realise now that I felt relieved.

The work was gone, the unanswered emails were gone, the world was simpler, and I had an excuse for why I hadn’t done the many things that need to be done. The plates had all crashed from their sticks and were in pieces on the ground, but the process of explaining to people why the things they wanted from me were not going to happen would be less time-consuming and less onerous than actually doing them.

It felt good, for the five minutes before my learned behaviours kicked in and I started the process of retrieving the damned thing.

I’m typing on it now, its worn keybooard a mute testimony to how much time I spend with it. But the machine is just a machine: it has no agency, it cares not whether I love or hate it, or whether it is good or bad for me.

I’m the one who has to think seriously about what I’m doing to myself, and listen to myself. Preferably before i do something more effectively self-sabotaging.

So if you’ve read this far, and you’re waiting for an email from me – hang on, I’ll get round to it. But perhaps not today. 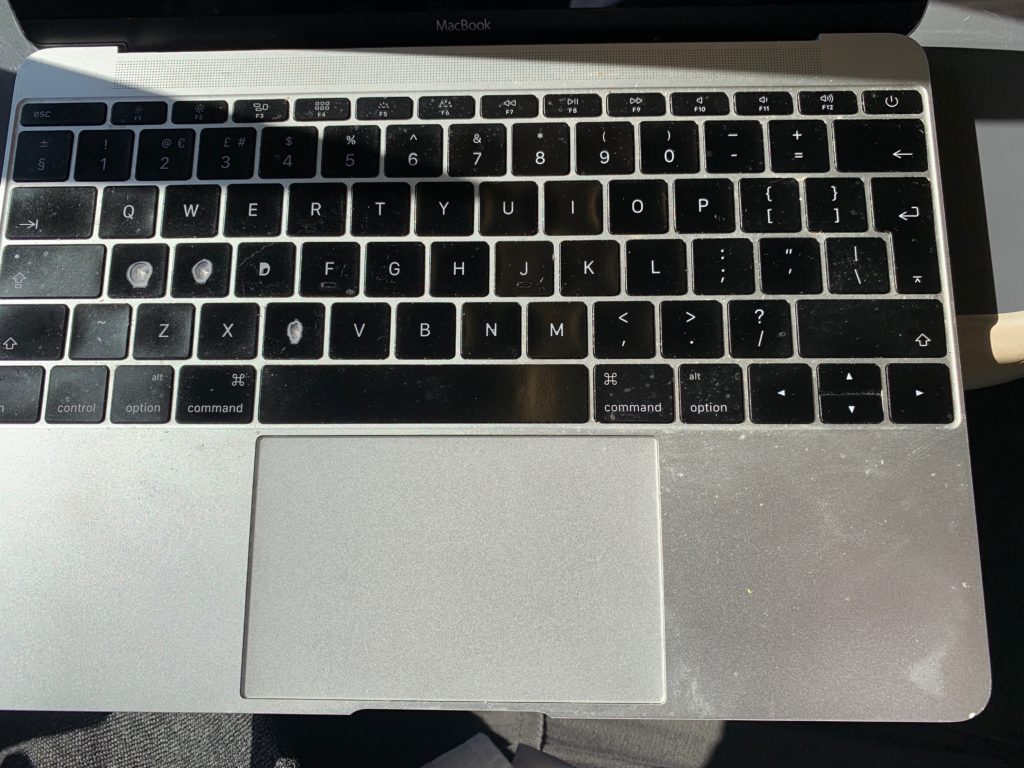 My MacBook Air, with worn keyboard